New York Magazine called them a “Lost Tribe, outsiders in an outsider’s world.” Among themselves, they were known as Parkies. And their contribution to contemporary world culture is significant. Wild Style graffiti was bred at the Bandshell with legendary graffiti clubs The Rolling Thunder Writers, Soul Artists, and The Rebels. Members of the original ZOO YORK (“Dogtown East”) skateboard team were Parkies. Bandshell musicians tried and tested new, emerging music, and many went on to play with celebrated bands such as the B52s, Stray Cats, Tito Puente, and others. Billy Squire also came out of the Bandshell. And three members of the Parkie clan were world-champion freestyle Frisbee players. Kerry Kollmar

was one of them. And he changed the sport forever when he invented the “nail-delay” and “tapping”. 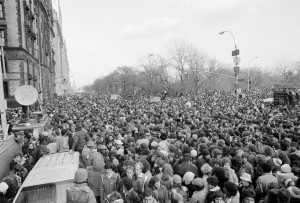 People jam the street at Central Park West and 72nd Street in New York, just outside the Dakota apartment house where John Lennon lived, Dec. 14, 1980, after leaving a memorial service held at the bandshell in Central Park, across the street. Lennon was murdered as he entered the building at left on Monday, December 8. Police estimated the crowd at 50,000 to 100,000. (AP Photo/David Bookstaver)

A historically important New York City story, Sunshine Rebels highlights the lives of the intriguing figures who lived communally, intensely, at times savagely, in the shadowy grounds of Central Park’s Naumburg Bandshell, the heart of a reeling and broken Gotham City. In the process contributed to cultural and artistic shifts that continue to have an impact today.

New York City is the capital of the world. Central Park is the center of the City, and it divides New York by latitude and longitude, North and South, East and West. The Park also physically demarcates the lines between the “haves” and the “have nots” – the rich and the poor. And while this remains true today, it was never more evident than in the 1970’s. 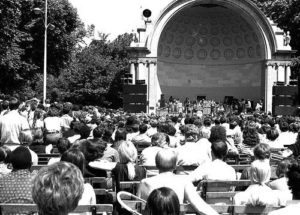 To the South of Central Park lies Wall Street, the world’s financial capital, the hub of America’s financial might. East of the Park lay the properties of some of the richest people on Earth. Traditionally the middle-class resides West of the Park. To the North lay Harlem and the Bronx, which in
the 1970s were some of the poorest, downtrodden, and dangerous places in America. While the City had clear-cut boundaries in the 1970’s, the Parkies had few, if any. Members of the clan came from everywhere – East, North, South and West. They came from within city limits and from far beyond, from in-state and out of state. Parkies came from rich families and poor. They were black, white and in-between. And none of the usual demarkation points played a role in the life of the Parkies. Race, socioeconomic class, sexual orientation – none of it mattered. What mattered was who you were and how you treated your brother and your sister. The result is that Parkies became one huge family, a family that more than three decades later remains tied by the bonds that bread them sewed.

New York is a place where life is heightened, experiences is intense and magnified, and chaos is concentrated. The City is often on the fore of social and cultural shifts, and the 1970’s were no exception. If American life was challenging and turbulent in the 1970’s, life in New York City was arguably most punishing. The country was in turmoil, New York City was a disaster.

Social and economic strife were the norm, and New York was a dangerous place rife with crime and corruption. Even the police were corrupt, as was evidenced by the 1971 Serpico fiasco and the Knapp Commission hearings. As the 70’s wore on New Yorkers became fed up with venal politicians and a corrupt and broken system. And the City was at a boiling point.

In the midst of the turmoil, many people chose to “drop out” of mainstream society. Others simply got left behind. For many of New York’s youth who couldn’t reconcile what they heard from parents, politicians, and corporate entities, Central Park was a haven. The Bandshell and Sheep Meadow became an Eden in the middle of a crumbling concrete jungle. In the Park young rebels tested themselves, tested their peers, and tested the world. In the Park, they learned how to survive, and how to create. Boundaries were pushed, stretched, and ultimately shattered. The results were sometimes tragic, sometimes ground-breaking. In the context of chaos, of changing societal and cultural norms, social unrest, and financial tightrope-walking, Parkies thrived. 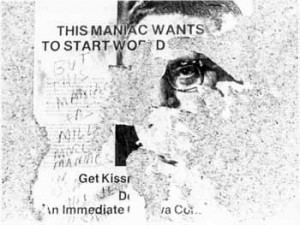 Nineteen sixty-seven was the Summer of Love, a season of light and hope. It was also a time of experimentation, both socially and artistically. Jefferson Airplane came out with Surrealistic Pillow in ‘67. Rheingold began sponsoring concerts at Central Park’s Wollman Ice Rink, which later became the Schaefer Music Festival. The Doors came out with Waiting for the Sun, Hendrix cut Electric Ladyland, and on June 1, 1967, The Beatles unveiled Sergeant Pepper’s Lonely Hearts Club Band, considered by many to be the best album of all time. In this milieu of changing times, the Social, Sexual and Psychedelic Revolutions were in full swing.

But if ‘67 was a season of light and a time of and hope, 1968 and subsequent years brought darkness, disillusionment and discontent. Nineteen sixty-eight was a leap year, and in retrospect many might have preferred to skip over the next four years. In April of ‘68 Martin Luther King was assassinated. Two months later Robert Kennedy was killed. Nineteen sixty-eight also saw the protests at Columbia University, which were a revolutionary response to, among other things, the school’s association with the Institute for Defense Analysis. Bob Feldman, a well-known student activist, had discovered documents in the International Law Library that detailed Columbia’s involvement with the military think tank. The situation turned bloody when police stormed the students. More than 700 were arrested, 150 injured. In January, 1969, Richard Milhous Nixon took office after narrowly defeating Hubert Humphrey. 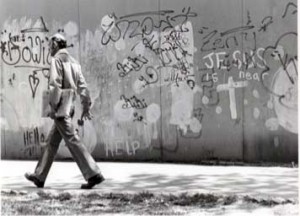 In 1964 Jerry Weinberg, a well-known student activist coined the maxim “never trust anyone over thirty”. Ten years later there might have been little wonder that many of America’s youth took those words as gospel. The public’s trust was shattered. And adolescents were more than disillusioned. They were disgusted and angry and overlooked. On April 30, 1975, just eight months after Nixon resigned, the world witnessed the Fall of Saigon. And on May 15th the last official battle took place between the United States and Vietnamese troops. The war was over. Finally.

But by now the Nation was exhausted, divided and damaged. To use Nixon’s own words “Rarely have so many people been so wrong about so much. Never have the consequences of their misunderstanding been so tragic.” Nixon had been talking about the Viet Nam War. But one could easily use these words to quantify much of what had happened in American life for the past decade. It seemed that in just a few short years America had been torn asunder by those we entrusted to serve and protect. Martin Luther King and the Kennedys had been murdered – not without mystery. Many of our musical heroes were dead, as were 58,193 (officially) American boys. Politicians were liars and cheats. The so-called adults had driven us apart, and into the ground – socially, economically and generationally. No longer could America’s youth trust politicians, “the system” or what they heard from the so-called adults. The mindset of the country’s youth had gone from a seeming blissful naivety to a jaded cynicism and anger. Chaotic unrest permeated every corner of society. For some the tipping point was Watergate. For others, it was simply the culmination of years of systematic brutality and lies. Whatever the cause, America’s youth – the youth of New York City, at least – had had enough. They were disabused and disgusted. As they approached adulthood they simply weren’t listening anymore. And they had no interest in integrating into a system they saw as corrupt, broken, diseased.